SALLY GRAY | Friends, Fashion and Fabulousness: The Making of an Australian Style
Dr Sally Gray is a creative thinker whose self-crafted career has been independent and inventive. She is currently a writer, curator, artist, concept developer and creative producer with projects realised, nationally and internationally, under the umbrella of the arts consultancy she founded in May 1994.
Sally, Gray, Sydney, Artist, Curator
22223
portfolio_page-template-default,single,single-portfolio_page,postid-22223,ajax_fade,page_not_loaded,,select-theme-ver-4.5,wpb-js-composer js-comp-ver-5.5.2,vc_responsive

Friends, Fashion and Fabulousness: The Making of an Australian Style

Friends, Fashion and Fabulousness: The Making of an Australian Style 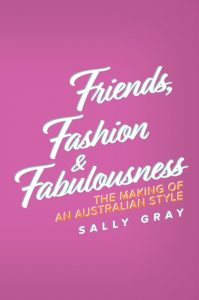 Four friends are central: fashion designers Jenny Kee and Linda Jackson and artists Peter Tully and David McDiarmid. Artfully woven with individual artistic achievements are their connections and influences: global travel on the ‘hippie trail’; inspiration gleaned from Europe, Asia and the USA; countercultural taste for vintage and ‘ethnic’ clothing; fashionable Australian milieus in London; dance clubbing in New York; fashion industry restructuring in the 1980s; the advent of globalisation; the AIDS epidemic; changing urban subcultures and the gentrification of the inner city.

Sally Gray has provided a fascinating historical insight into the lives of four creatives who achieved such a lot in art and fashion from the 1970s to the 1990s. What a colourful story of our lives & times. A great read!

The time is right to unlock the vibrant world of 1970s and ‘80s Australian fashion. Going beyond the space of the workroom, parade, main-street or department store, Sally Gray uncovers a lost world that redesigned the very definition of Australian fashion. Ranging in diversity of topic from the birth of vintage to the development of the first Australian hybrid ‘Ethnic’ styles, and criss-crossing the globe from Sydney to Melbourne, the straits of Malacca to New York and London, this work reconnects people, place, and brilliant personalities to tell a wholly new story. Deeply researched, sensitive and witty, the work records the design vision of a pioneering generation. It is hard to put down once opened.

This is a story that must be told. An amazing history of creative people coming together and working with ideas from around the world. It shows what was going on when something truly fantastic was happening in Australia and how if you want to be creative and do something different, just follow the passion, you’re not alone. For me to read about this history and learn things I didn’t know, it’s fantastic.

In this remarkable work Sally Gray weaves together thousands of strands of research to create a vivid tapestry of talent, creativity and inspiration in Australia in the 1970s and 80s. Art, fashion, music, sex, and the complex fabric of life itself are finely evoked in this seamless study, which is a joy to read.

Sally Grays book is a benchmark project for a new type of fashion history. Her detailed study of the formation of a distinctive Australian style in fashion is engendered, enmeshed and evolved through the authors affecting tale of its protagonists and the world they created and moved through. The author brings the intersecting milieus alive through a multifaceted lens of social, cultural, political and aesthetic analysis that connects cities like Melbourne, London and Sydney in an adventure that is uniquely Australian yet universal.