SALLY GRAY | David McDiarmid’s ‘Rainbow Aphorism’ installations, London 2017
Dr Sally Gray is a creative thinker whose self-crafted career has been independent and inventive. She is currently a writer, curator, artist, concept developer and creative producer with projects realised, nationally and internationally, under the umbrella of the arts consultancy she founded in May 1994.
Sally, Gray, Sydney, Artist, Curator
22235
portfolio_page-template-default,single,single-portfolio_page,postid-22235,ajax_fade,page_not_loaded,,select-theme-ver-4.5,wpb-js-composer js-comp-ver-5.5.2,vc_responsive 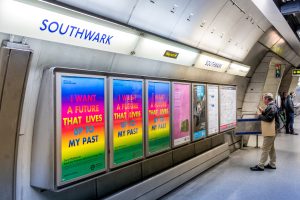 The first of November 2017 was the official launch date for multiple London installations of David McDiarmid’s digital art works. The ‘Rainbow Aphorisms’ – a series of digital works created by McDiarmid between 1993-1995 – will appear at sites across the London Underground network and throughout Clapham in South London.

The project has been initiated by Joe Scotland, Director and Laura Harford, Curator from Studio Voltaire working in partnership with Jessica Vaughan, Curator for Art on The Underground. Sally Gray has worked with Studio Voltaire and Art on the Underground to manage the Sydney end of the project on behalf of the David McDiarmid creative legacy. The project is supported by Studio Voltaire, London Underground and This is Clapham BID. It coincides with events throughout Britain in 2017 commemorating the 1967 partial decriminalization of male homosexual acts.

More on the London Rainbow Aphorism Project and the David McDiarmid legacy.